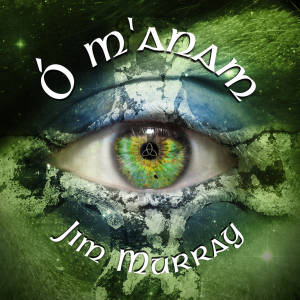 Jim now examines his Irish heritage and releases, his eighth record with the new CD, “Ó m’anam” (from my heart/soul) to be released 3/17/17 for St. Patrick’s Day. Jim is a musician who is passionate about his craft and his ancestry, conscientious about this music’s deep roots, diligent in his research, and bold enough to celebrate them with his versions on his own record. This CD is about two thirds traditional and one third more modern in a diverse mix of his favorite Irish songs that are extremely well-produced by CRAIG WILLIAMS of DR CAW Productions.

In his second solo CD Jim showcases his lead singing and multiple talents by also providing backing vocals, drums, percussion and bodhrán. He once again works with his good friend well-known session man and multi-instrumentalist JOHN RICE (acoustic and electric guitars, dobro, fiddle, mandolin, banjo and piano) (Mavis Staples, Blind Boys of Alabama, Wilco) who provides arrangements and assisted in organizing and bringing together Irish players JOHN WILLIAMS (accordions and whistles) (Five All-Ireland titles, Solas, Dean Magraw) and SEAN RYAN (uilleann pipes)(multiple All-Ireland awards on three instruments, Trinity Irish Dance Company, Chicago’s Orchestra Hall.) These musician friends enjoy many shared traits and brilliantly contribute to 17 diverse yet related songs. Jim taps a number of resources, ranging from these traditional Irish musicians to musician friends he has played with live and in the studio including ERIC HOCHBERG (Kurt Elling, Pat Metheny, Howard Levy) and KLEM HAYES (Alan Parsons, Spencer Davis, Survivor), playing bass and singing by PATTI and HARRY REINHART and TOM KRO from The Midnight Band and piano and synthesizer work from his friend FRANK LUCAS (Jennifer Lopez, Fire Garden, Dee Snider.) He has enlisted the exceptional backing vocals of MARY LOU O’BRIEN who contributes her lovely voice on many of the songs. The result is an album that is both ambitious in its new interpretation and comfortably traditional while taking the listener on Jim’s personal journey back to his Irish roots.
Jim has had a keen interest in music since his first professional performance at the age of 8 years in Southwestern Michigan. Murray has played in, recorded and produced many different styles and other projects including Midnight, RPM, Nightflight, “Brother John” Kattke, Soul Shakedown, Michael McDermott and Three Fingers; created commercials and jingles for clients such as Crown; and has been a musical director, working on composition, score, and sound design for films such as “Carnival” and “Changingman”.
By LTM 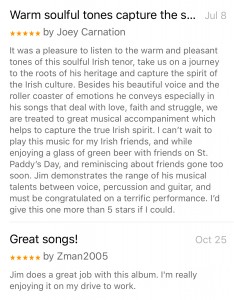 “THIS LOVE OF MINE” by Jim Murray

Jim Murray, drumming vocalist and producer of Skip Towne and the Greyhounds three CDs and the Drunk Whisperers’ CD has released a solo record on Skip Towne Records entitled, “This Love of Mine”. Part anthology and part concept album his record takes the listener on a journey through finding love, feeling it strongly, trying to hold on to it, losing it, suffering with the loss and then considering whether to be open enough to seek it out again. 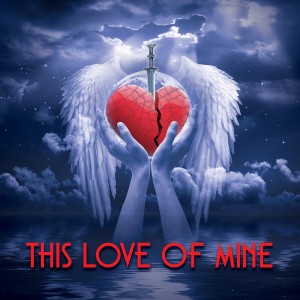 On this record Jim covers all types of music including artists such as Lindsey Buckingham of Fleetwood Mac, The Eagles, Ben Folds, Matt Nathanson, Andrew Lloyd Weber, Bob Dylan, Junior Parker, Rogers and Hart, Chris Isaak, U2, Sting, Tommy Dorsey/Sinatra, Neil Diamond and Charlie Singleton. Although from different musical styles and time periods, the interesting hit songs weave together nicely to tell a story of love in many forms as it is found, experienced and lost. “Big Love” by Lindsey Buckingham begins the record with excellent guitar work by Dave Onderdonk and considers both the Buckingham live acoustic and the Fleetwood Mac recorded band versions of this song by making a transition to a band for the last third of the tune with Dave soloing with a wah wah pedal electric guitar. “Lyin’ Eyes” is an exceptionally accurate rendition due to the contributions of multi-instrumentalist, John Rice, who plays throughout this CD, is given an arranging credit on the record, and encouraged Jim to record this CD project. “The Luckiest” is a beautiful, emotional song by Ben Folds that features Lyndsey Baker on piano and Larry Gray on cello along with Rice’s strings. “Come On Get Higher” is a Matt Nathanson song from the “Drunk Whisperers” CD  a band which featured Peter Quinn on vocals and Harry Reinhart on guitar as well as John Rice, with a different type of acoustic presentation of this song with Jim playing congas rather than the drum machine used on the original record. “All I Ask of You” is the Weber favorite from Phantom of the Opera featuring Joanne Togati of Miami, Florida singing the part of Christine in the duet with Jim. “Make You Feel My Love” is the Bob Dylan song made popular by Billy Joel.  Jim and John Rice present a heartfelt, inspiring rendition on guitars rather than piano. “Mystery Train” features Eric Hochberg on upright bass and Peter Quinn on harmonica with a very nice laid back groove to this classic song made popular by Elvis and many other blues artists. Jim and John bring a fresh arrangement to “Blue Moon” that includes a nod to the “Cowboy Junkies” version and a suggestion of “Sleep Walk” in the beautiful solo of John Rice on pedal steel guitar. “Wicked Game” is the Chris Isaak hit which Jim performs with his long standing trio, RPM that includes Gregg Richardson on bass and Mark Peterson on guitar. “One” is the U2 super hit with lyrics, written by lead singer Bono that were inspired by the band members’ fractured relationships and the German reunification. Although the lyrics ostensibly describe “disunity”, they have been interpreted in other ways. Rice’s guitar work is flawless and Murray’s drums are super tight. “When We Dance” is Sting’s song from 1994 that recently was added as a perfect addition that fit seamlessly into his current Broadway production, “The Last Ship”. The song describes the feeling of loving someone who loves someone else. Jim’s version features a beautiful cello solo by Larry Gray, Eric Hochberg on bass and Tamara Anderson on backing vocals. Jim’s drumming utilizes West African as well as Middle Eastern instruments along with the drum set. “This Love of Mine” is the Tommy Dorsey classic made popular by Frank Sinatra. Jim gives a deferential nod to this on his back tray cover by re-enacting the Sinatra cover from “In The Wee Small Hours” with a photo taken while vacationing at the legendary Fontainebleau Hotel in Miami Beach frequented by Sinatra, Elvis and others. On this song Rice adds a sweet vibe part that doubles the guitar for a George Shearing feel to the song. Jim’s “Solitary Man” is a unique rendition that pays deference to Neal Diamond and Chris Isaak versions while adding interesting cool new drum groove in his first drumming section. “Help the Poor” is a song played by Jim’s main project, Skip Towne and the Greyhounds (from their first CD) performed live at Shady Shores Resort in Sister Lakes, Michigan where the band recorded half of their “Detours” album. It was a particularly meaningful and emotional moment for Jim who came full circle to return to play at the venue where he first played drums in a dance band when he was 12 years old. The pre-sale on iTunes offers instant gratification tracks of “Make You Feel My Love” and “When We Dance”.  A digital purchase on iTunes also includes, “I Don’t’ Want To Set The World On Fire” with a 1940’s Ink Spots sound.

ROCK CHICAGO MAGAZINE REVIEW On the local front, long time Chicago area drummer Jim Murray has released his first solo recording entitled “This Love of Mine”, a diverse mix of love songs and ballads that have become his own personal favorites over the many years. While handling his usual drums and percussion duties on the CD, Jim also steps out from behind his drum kit to front and center, with microphone in hand, and adeptly performs the lead vocals on all fourteen tracks. With a nod to the singer that made the Tommy Dorsey classic title track famous, Frank Sinatra, Jim did it his way. Murray, known as the long time drummer for the Chicago based blues band “Skip Towne and the Greyhounds”, the Skip Towne off shoot “The Drunk Whisperers”, as well as “RPM” (Richardson, Peterson, Murray), has put together what could be best described as part personal anthology, part personal passion play, recruiting members of the bands mentioned above and others, such as Dave Onderdonk, whose crisp guitar strumming on the opening track, Fleetwood Mac’s “Big Love”, would make Lindsey Buckingham proud. Florida’s Joann Togati joins Jim on track five for a pleasing rendition of The Phantom of the Opera’s “All I Ask of You”. On the seventh track, Jim takes over vocals on the song “Mystery Train”, a tune in which he had previously recorded with Skip Towne. The song, which was made famous by other artists such as Elvis Presley and Paul Butterfield, has long time Chicago area lead vocalist Peter Quinn singing on the Skip Towne version. Quinn sits in on Jim’s rendition, playing harmonica. The aforementioned title track, “This Love of Mine”, slots in at number twelve, and, in the spirit of the song, you can find a picture of Jim recreating the famous fedora clad Sinatra cover from “In the Wee Small hours” on the back of the CD jacket. A live version of the classic Blues standard “Help the Poor” recorded live at the Shady Shores Resort in Sister Lakes, Michigan, closes out the disc. Also joining Jim on the disc is John Rice, another Skip Towne alum. Rice, who assisted in orchestrating many of the song arrangements, is a long time Nashville first call session musician and multi instrumentalist. A very well produced and evenly balanced recording overall, “This Love of Mine” would make an enjoyable addition to anyone’s music listening pleasure for the upcoming holidays. For a complete track listing and more information on ordering the CD, go to: https://itunes.apple.com/us/album/this-love-of-mine/id939675176 Reviewed by Patrick Kinsella http://rockchicago.net/cd-review-jim-murray-this-love-of-mine/

“Really enjoyed the rocking tunes in this love anthology. Jim Murray is multi-talented both vocals and drums and his collaborators make the album a joy to listen to.”